Dr Innes Keighren, Jo Norcup and Geography Workshop are very pleased to announce the line up of the Landscapes of Detectorists session to be held at the Royal Geographical Society’s 2018 annual conference later this year. We are especially excited because we have a very special discussant for the session *drum roll* Adam Tandy producer of series 1 and 2 of Detectorists. Adam is a multi-award-winning comedy producer, renowned for his work in BBC comedy over the past three decades, most recently with his work on The Thick of It, In The Loop, The League of Gentlemen, and Inside No. 9. We look forward to recording the session and further details will be posted nearer the time. Until then, enjoy the abstracts that will make for a gem of a session. 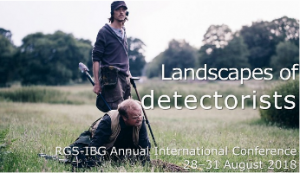 Sponsored by the Social and Cultural Geography Research Group.of the Royal Geographical Society and Institute of British Geographers (RGS-IBG).

The BAFTA-winning situation comedy-drama Detectorists has, across three series and a Christmas special (2014–17), garnered critical praise for its affectionate portrayal of metal detecting and amateur archaeology in rural England. In its attention to the embodied practice of detecting and to the social worlds of detectorists, the programme has been described by critics variously as “about hardly anything and almost everything” (Lloyd 2015) and “the most accurate portrait of men being men that you’ll find in current popular culture” (Fewery 2015). For one Twitter user (Sumsion 2014), the show is simply “a warm, beguiling, slow-burn meditation on male friendship and prosaic details of Englishness, plus some metal”. Explaining his motivation for creating Detectorists, Mackenzie Crook, writer and director of the programme, has said “I wanted to do an exploration of men and their obsessions, and I wanted to do a celebration of people and their hobbies, and a celebration of the English countryside” (Crook 2015).

While the comedy in Detectorists centres largely on the friendship of Andy Stone (Mackenzie Crook) and Lance Stater (Toby Jones) as they pursue their niche hobby in the diverse company of the Danebury Metal Detecting Club (DMDC), the dramatic foil is provided by the relationships Andy and Lance have with their significant others—Andy’s geography-graduate, school-teacher wife, Becky (Rachael Stirling) and Lance’s exploitative ex-wife, Maggie (Lucy Benjamin)—and their antagonists, ‘Simon and Garfunkel’ (Simon Farnaby and Paul Casar), members of the DMDC’s arch rivals, the Antiquisearchers/Dirt Sharks. Nuanced characterisation and relatable situations have endeared Detectorists to viewers in the United Kingdom and beyond. Fans of the programme praise its “humanity and the honest observations of the real world” (Meaden 2015).

Where Detectorists is distinct from most situation comedies is that much of the action takes place outdoors, in the fields and meadows where the programme’s protagonists pursue their hobby. Both aesthetically and thematically, landscape dominates Detectorists. Filmed on location in Framlingham, Suffolk—standing in for Essex, and the fictional town of Danebury—the visual palate of the programme enfolds a non-human supporting cast of insects, birds, plants, and trees, and variously echoes the landscape paintings of Thomas Gainsborough and George Shaw, and the cinematic vision of Peter Hall’s Akenfield (1974). Landscape is, also, the focus of the protagonists’ preoccupations; it is variously walked, surveyed, sensed, gazed upon, read, and dug. Landscape is where the programme’s characters seek solitude, find companionship, and navigate the sometimes-dramatic intrusions from ‘the rude world’. Landscape reveals the past while concealing the prospect of future discovery.

“When I look at this landscape, I can read it”: practices of landscape interpretation in Detectorists
Innes M. Keighren, Royal Holloway, University of London

The ability to read the surface of the earth for clues as to what might lie beneath it is a skill fundamental to successful metal detecting. Knowing where in a landscape to focus one’s search, on the basis of topography and the visible traces of earlier human activity, has been described as the hobby’s “golden rule” (Fletcher, 2009, p. 6). This paper takes as its focus the practices of landscape reading employed by the programme’s protagonists in their attempts, during the first series, to locate the burial place of Sexred, king of the East-Saxons. These practices reveal a tension between a belief that reading landscape is a tacit skill based upon instinct and in-the-field experience, and the pragmatic realisation that it might usefully be supplemented by particular visual technologies, such as Google Earth and Ordnance Survey maps. Underpinning this tension is a particular epistemological question about whose knowledge is most valuable in locating the burial site: the instinctive sense of Lance and Andy, the titular detectorists, or the disciplinary perspective of Andy’s geography-graduate girlfriend, Becky. Reading landscape is shown to be, at turns, a subjective undertaking (drawing on memory and experience) and an objective enterprise (depending upon rationality, detachment, and distance).

Disquieting geographies: the Detectorists hoard of the everyday
Isla Forsyth, University of Nottingham

In the first episode of the final series of Detectorists, Andy hands Lance a piece of rusted metal he’s just unearthed and asks what it could be. Lance replies: ‘That’s a retaining plate from the back of a mid-twentieth-century socket mount.’ ‘Brilliant. I can cross that off my wish list’, Andy sardonically replies.

The mundane hoard of the metal detectorist is an uncanny collection; objects interned after their disposal or loss resurface to make for disquieting geographies. It is the persistence of objects beyond use, and their afterlives that leads the detectorists’ hoard to be at once cathartic—layering the present into time and place, melancholic, unearthing sites abandoned and pasts buried—and unsettling, as the present’s seeming permanence is confronted with its inevitable transience.

Overall, this paper will explore how histories and geographies can be recovered through the digging up of everyday objects, and how such mundane hoards reveal the place of materiality, agency and aesthetics in narrating genealogies of landscape. It proposes Detectorists as a meditation on these disquieting geographies. Disquieting, as by asking us to imagine landscapes through their forgotten everyday histories we are reminded that the present and our own lives will disintegrate into shards of buried objects, into a scattering of ordinary moments and mundane activities. A retaining plate may not be Roman gold but as Lance reminds Andy: ‘Don’t’ knock it, mate. That’s a piece of history right there. Small scrap of a life long forgotten’.

“When I get up it just goes to shit”: unearthing the everyday vertical landscapes of Detectorists
Andrew Harris, University College London

This paper explores how the vertical landscapes featured and depicted in Detectorists shape and represent forms of everyday life, social status and geographical knowledge. Although there is an emerging scholarship examining verticality with regards to science-fiction literature and associated films, there remains limited engagement with TV dramas especially those, like Detectorists, set away from more spectacular urban skylines. The programme’s vertical landscapes are most evident in the protagonists’ regular engagement with the sub-surface in their quest for material and personal treasure. Yet this paper argues that this multi-layered engagement with the Essex (and Suffolk) landscape seeps into other vertical domains too. First, Detectorists shows how the archetypal view from above, mediated through cartographic, digital and military technologies, is continually unsettled by misinterpretations, disconnections and alternative imaginations. Secondly, the series demonstrates how emotional and personal ups and downs can be represented and understood through vertical relations and outcomes; how hopes and aspirations can get off the ground yet easily be brought down to earth.

“That’s got to be a first, woman reads map.” Gender, hobby geographies, and the landscapes of Detectorists

Over its three series, Detectorists has garnered awards and glowing accolades as a thoughtful meditation on male friendship, masculinity, and the nuances of male gender in the rural English landscape. Concentrated through the hobby of metal detecting, notions of masculinity are simultaneously reasserted and disrupted as the hobby is performed and knowledges are applied in the fields and across various sites in and around the fictional landscape of the rural town of Danebury. Having the time to undertake their hobby gives main protagonists Lance Stater and Andy Stone a sense of self-definition and wider purpose in their pursuit of discovering fragments of hidden treasures both literal and metaphorical, connecting them with lives lived in the past to give them a meaningful geographical place in the world in the present. Yet reviews of Detectorists have too often failed to acknowledge the rich portrayals of female gendered roles from the wider company of players who are vital in the lives of Andy and Lance in facilitating their practice of metal detecting, knowledge-making, and understanding of their rural landscape. By focusing attention on renderings of female gender in Detectorists, this paper will raise broader questions about depictions of gender, identity, hobby geographies, and knowledge-making in the construction of popular representations of the English landscape.

Adam Tandy is the BAFTA-winning producer of Detectorists. He has produced several of the most significant British television comedy series of the past quarter century, including The Armando Iannucci Shows, The Thick of It, The League of Gentlemen, and Inside No. 9.