Geography Workshop sponsors the ongoing research outputs from Dr Norcup's 2015 thesis that spent nearly a decade (part time) attending to the detecting, sourcing and recovery of the correspondence archive and gathering of all issues of the radical humanist, anti-racist and anti-sexist geography education journal Contemporary Issues in Geography and Education (CIGE), published between 1983 - 1991 by the Association for Curriculum Development in Geography (ACDG).

The ACDG - from 1985 the ACD - Association for Curriculum Development - was an organisation that focused on geography but then began working across all school subject disciplines with the GLC/ILEA to produce training and education materials for anti-racist education and lobbied for reconstructivist education curricula. Dawn Gill (CIGE and ACD(G)'s founder), was also one of the key members of the ILEA anti-racist inspectorate. The crucible of Gill's work had begun when she assisted Peter Mitchell, Head teacher of Quentin Kynaston school in Swiss Cottage / West Hampstead, to develop the first anti-racist policy for any school in the UK.

CIGE was the longest running publication of all the initiatives that the ACD(G) developed, and their aims and ambitions are the touchstone for Geography Workshop's values. Geography Workshop's own motto - nostrum eat creare mundum: the world is ours to create - is a nod to the summary aim of the journal series founded by secondary school geography teacher, Dawn Gill and co-edited by Gill and Ian G Cook.

In digitising every issue of CIGE and maintaining web space for the digital archive, Geography Workshop provides a free online archive resource for those interested in the recent history of British-based, internationally connected anti-racist, anti-sexist intersectional geography education.

The entire series of CIGE is not held in complete sets in any formal library or archive in the UK, but it can be found in the links below. Each issue was themed around universal human themes concerning geographies of power, access and equity. Theme issues included race and racism, sexism, ecological crisis, apartheid capitalism, post colonialism, media and globalisation, apartheid capitalism, war and peace, gender, and anarchism.

CIGE anticipated discussions that would grow in prominence in following decades. As well as the material illustrating the contemporary groundswell of activism and knowledge-making produced by school teachers, students, artists, community groups and social and environmental justice activists, related materials advertised within these publications reveal a rich level of activity and longer history of intersectional equity and ideas for social and environmental justice going back well into the late 19th century.

While recovery reveals the vibrancy, that copies of these materials and the stories of these accounts have been largely lost in the recent past, asks ongoing questions about the cultural processes of erasure, discourses of dismissiveness and slights of citations that, over time, have compounded to obscure and remove this initiative from its recent past. Its legacies however continue through this and similar projects such as the Alternative School of Economics art works and interventions.

Geography Workshop is proud to maintain and host CIGE's digital archive in memory of Dawn Gill (1949 - 2017).

A monograph based on Dr Norcup's thesis is in production for publication 2022. 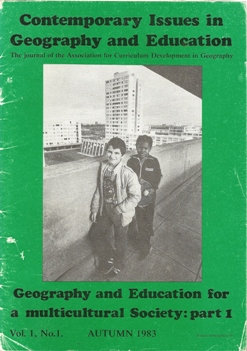 Festive seasonal greetings to one and all. Here at GW towers we have been taking stock of the past year, which has been our first… Read More »2016 / 2017: A memorable first year in the life of GW

Digitizing the Archives: Contemporary Issues in Geography and Education